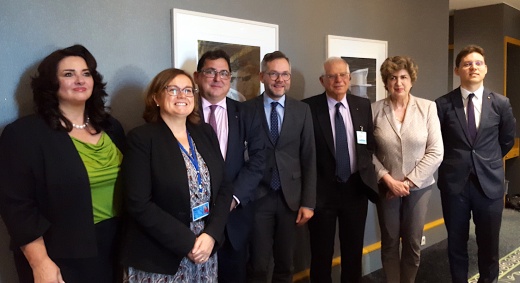 Socialist European affairs ministers met today and condemned the lack of progress of the Polish government in conforming to the rule of law.

The ministers also discussed the accession process for FYR Macedonia and Albania, and assessed the preparation for the European Council later this week, pointing out the lack of the social dimension.

German Minister of State for Europe and chair of the network Michael Roth said:

“In recent months, the Polish government has showed little willingness to respect democracy and fundamental rights. The judiciary and the rule of law are not institutions that governments should undermine. Poland needs to conform and implement the rule of law immediately. I give my full support to Commission First Vice-President Frans Timmermans to continue his excellent work.”

“It is very encouraging that we are moving forward with the accession talks with our partners FYR Macedonia and Albania in the Balkans. I highly appreciate the positive developments our friends in the two countries have been achieved. We support the Commission’s recommendations to start accession talks with Albania and FYR Macedonia. I very much welcome the agreement that Skopje and Athens reached on the year-long name dispute. This will facilitate the coming discussions. Europe can benefit from enlargement. A united Europe, a Europe with strong political, social and economic stability is a stronger Europe.

“Finally, I welcome the discussion on creating a stabilisation function for the eurozone that will take place at the euro summit on Friday. It is high time that we create an instrument that promotes investment and convergence in the Eurozone. We have to ensure that our social systems, our welfare states and our economic sustainability are protected against future crises. This is an issue that we have long been discussing in this network. I am very excited to follow the discussion taking concrete shape. What we really need is a much more binding coordination of economic, labour, social and tax policy.”