Stakeholders meeting on the European Pillar of Social Rights

In the framework of the European Pillar of Social Rights first anniversary, Maria João Rodrigues travelled to the capital of Romania, country which will hold the rotating Presidency of the European Council from January 1st 2019.

The stakeholders dialogue was organised by the European Parliament Liaison Office in Bucharest and the think tank Institutul European din Romania.

Equal opportunities, fair working condition and the digital revolution and its impact on the labour market were the main topics discussed. The Social Pillar is an opportunity for Romania to catch up and align the its model with the European one. 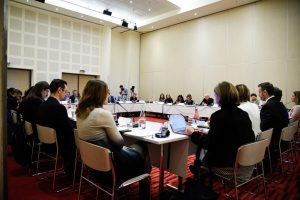 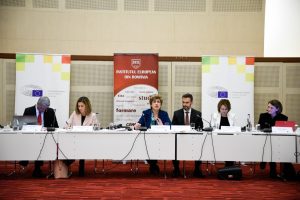 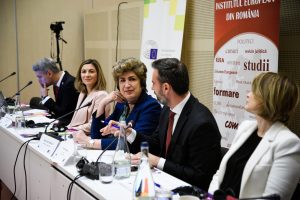 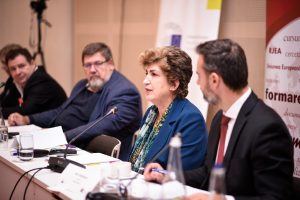 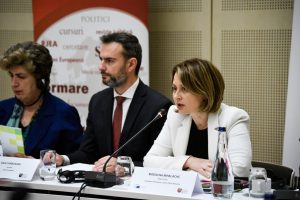 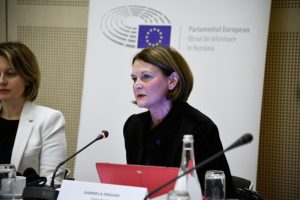 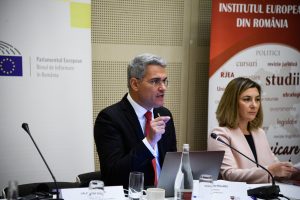 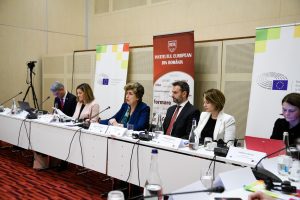 Programme of the stakeholders dialogue 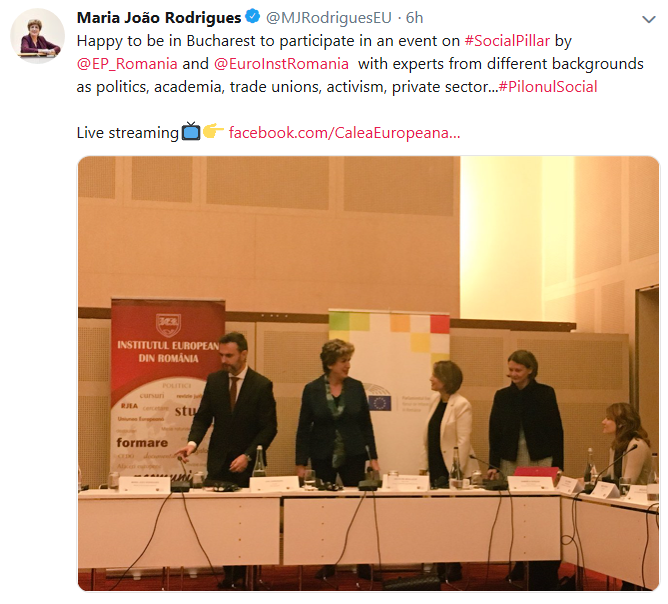 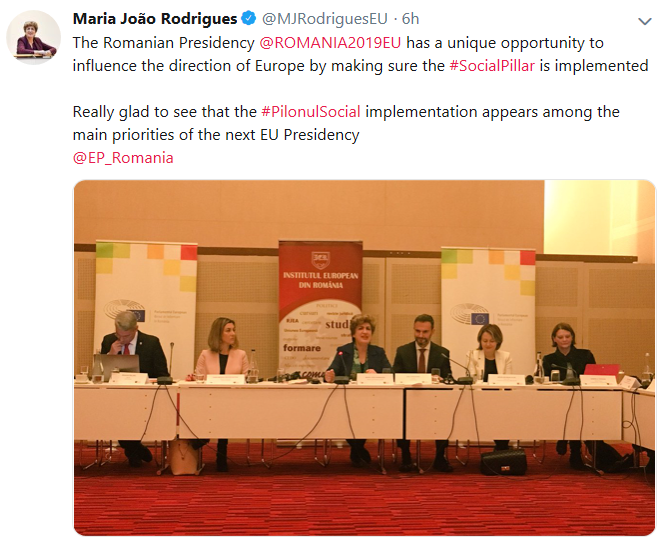 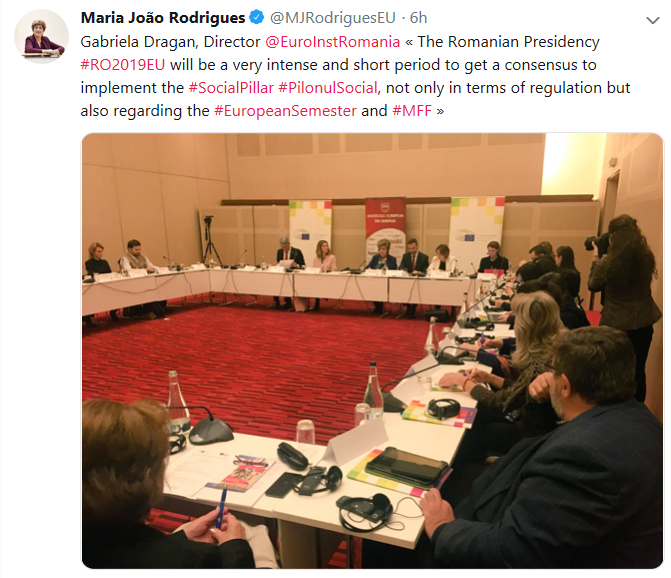 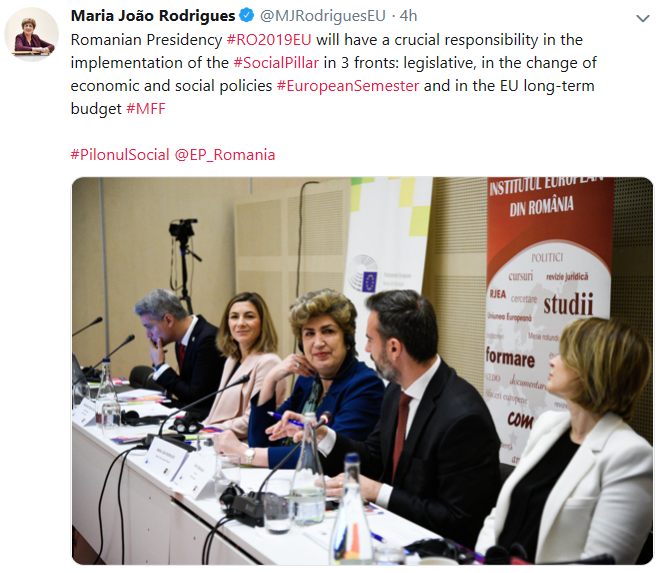 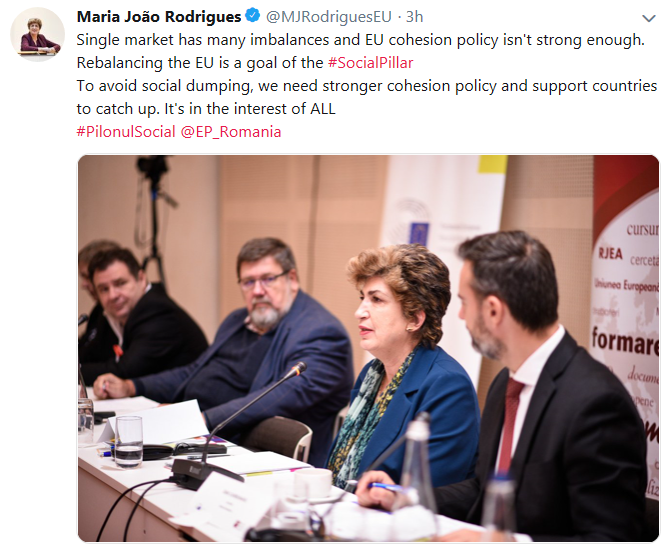 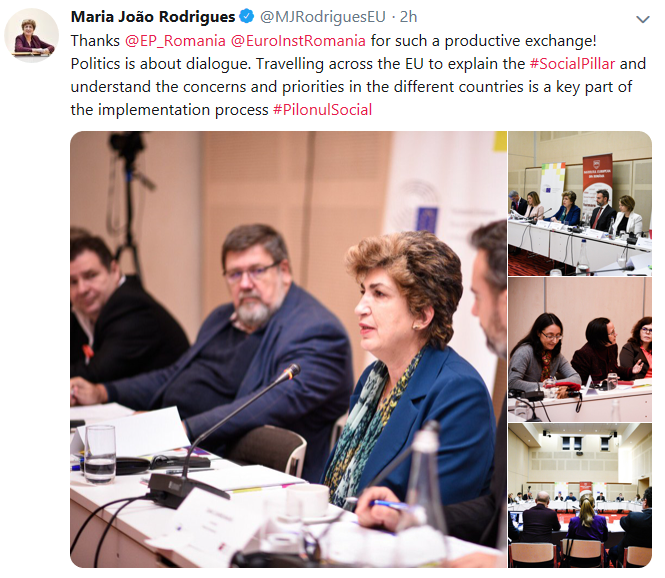 Regarding the implementation of the social pillar, Rodrigues said: “First we need to see what can be done during the presidency held by Austria. We already know that Romania, through this presidency, will play a very important role in the interpretation of this pillar. Firstly, on the legislative background, because there will be negotiations on a very important directive on improving working conditions.The trialogue will be launched, but the law will be finalized during the Romanian presidency. It will have to be approved before the European Parliament elections. If there is political will, this is possible”.

It is a law that all people working in Europe, irrespective of the sector of activity, will be able to count on two important things: the first is related to the right to fair wages, access to information, and the second to social protection.”This will be one of the most important social laws ever adopted and we are close to final approval,” Rodrigues explained.
She also said that another important law is being proposed for approval as part of this pillar – the work-life balance, but also a recommendation on improving social protection.

“A work authority must be created with the ability to prevent misused mobility – when a worker goes to work in another country, he should benefit from working conditions in that country. All states should showcase the progress of their national reform during the first quarter of next year. We have to convince all states to give special importance to this pillar. ”

In this context, related to Brexit, she said: “At the legislative level, it is sometimes not easy to adopt a European law with a very active position for the United Kingdom, which often has a conservative position. British authorities are not very eager to have European legislation. As for the European budget, we may have a problem, because it will be smaller, but this will only happen when the transition period is over. We have to see when this will be. In the meantime, we have ensured that the next social fund is in line with the social pillar. We hope that Romania’s presidency of the EC will consolidate this decision. ”

Maria João Rodrigues concluded: “The Council Presidency is a unique occasion for a country to show its commitment to European ambition, to make its contribution by listening to other issues, and by putting its own fingerprint on the Union’s direction. I believe that Romania’s most important footprint is that of a stronger commitment to economic, social and territorial cohesion. It is needed anywhere. It is the central point of European integration, which has weakened in recent years, and we need to reverse this trend. ”

The European Social Rights Pillar was signed by the European Parliament, the Council and the European Commission at the Social Summit for Growth and Equal Opportunities held in Gothenburg (Sweden) on 17 November 2017.

It is designed to provide new and more effective rights for citizens. It is structured in three main categories: equal opportunities and access to the labour market; fair working conditions; social protection and social inclusion.

Friday’s meeting – attended by representatives of institutions and associations and public policy experts – is tackled such as equal opportunities, equal working conditions, social protection and inclusion, and the impact of the digital revolution on the labour market.