The International Forum of Social democracy took place on October 13th in Vilnius and was hosted by the Lithuanian Social Democratic Party, in partnership with the Friedrich-Ebert Stiftung, Institute of International Relations and Political Science of Vilnius University.

Contemporary democratic left forces face numerous challenges. In recent years, throughout whole Europe there have been significant electoral losses that in some cases almost wiped social democratic parties off the political map. Global economic trends are worrisome as well. Income gap both among and within countries has been dramatically widening and there is no guarantee that against the backdrop of fast technological change it is going to subside soon. We also observe increasing tensions that threat to seriously undermine structures of international cooperation. In the wake of climate change and intensifying migration trends, such developments hardly can be more concerning for the democratic left movement that has always been at the forefront of promoting equality and inclusiveness.

Social democratic parties in the post-communist East-Central Europe have their structural specificities mainly related with geopolitical and historical background of the region. Yet we also observe quite significant differences how these political forces have shaped their identities and how much they have been favoured in the electoral competition. This forum meant to be a public discussion among the front-speakers of the democratic left in the region and beyond it to share their stories and key insights how to re-invigorate the determination within the society to stand for the core social democratic ideas and values: 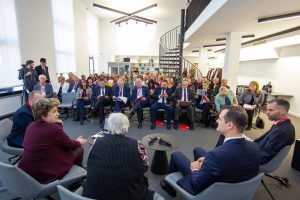 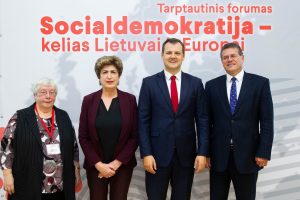 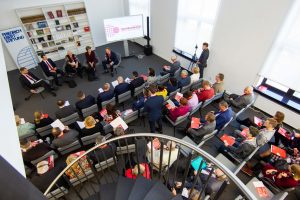 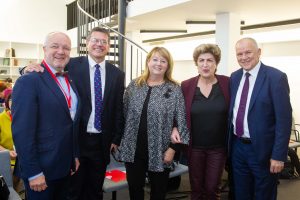 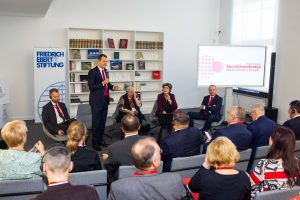 News article about the forum in by the Baltic News Service:

During the discussion, social democrats from various European countries underlined that social democrats must focus on taking care of people, especially children and education, due to the ongoing changes in the working environment and arising new digitalization-related challenges.

“People no longer feel safe and that insecurity is caused by globalization, as well as global competition. How will they affect jobs, cities we live in, how will they affect the future of our children? I think when we consider priorities, we should restore confidence in the European project in the upcoming year of EP election,” EC Vice President Maros Sevcovic said.

MEP Maria Joao Rodrigues underlined that the European Union should seek to ensure better living conditions for all groups: men, women and children. “All target groups should have better standards ensured, including working conditions and pension. (…) We always say that no matter what sector you work in, you have two important guarantees – a clear employment contract and access to social guarantees,” she said. The MEP underlined that social democrats are in favor of changes, adding, however, that it’s vital to support people and invest in education.

The forum was composed by three panel discussions on three key strategic challenges for current social democratic forces, namely on the ways how to counteract global drift from the welfare state, almost universal electoral losses of traditional democratic left parties, and identity issues concerning the future of Europe.

For a long time, social democracy has sought for ways to tame but not replace the capitalism. Thanks to cross-class compromises in the 1930s in Scandinavian countries and after the Second World War in other parts of West Europe, social democrats lay ground for the welfare state that ensured both democratic stability and inclusive growth for many years ahead. However, for several last decades, the capitalism has increasingly become functioning as a global force disembedded from local social relations and institutional structures of the nation-state. And, despite the 4th technological revolution, or perhaps because of it, the income gap between the richest and the rest of the world has widened even further. The perennial question thus has come to the forefront again – What is to be done and how? Should we get more radical and confrontational, or does the answer still lie in moderate political solutions?

Throughout Europe, social democrats have experienced sweeping electoral losses. In various countries, we have been reduced to the second league. At the European Parliament, the ranks of the European socialists have also notably shrunk. In the wake of growing multiculturalism and intensifying migration waves, one of the acutest dilemmas for social democrats is how to reconcile progressive ideas of openness and inclusion with a call for representation of blue-collar workers and other vulnerable groups who happen to follow socially conservative values. Should we prioritize one goal for another or treat them as of equal value for the social democratic cause? Are we ready to become the movement that is not as vastly popular as ideologically coherent, or should we try to remain catch-all party at any cost?

From the outset, social democrats have been vocal supporters of enhancing cooperation among nations to fight for peace and the socially oppressed. On the other hand, when the European Communities were founded, the left forces initially treated the actual project with a grain of salt. There was a sincere concern that such kind of European integration would mainly work for the benefit of owners at the expense of social guarantees for the rest society. However, since the late 1980s, social democrats embraced the idea of the EU to tackle structural deficiencies of the welfare state in the wake of increasing global competition. After further 30 years, we may observe that the overall results of the European integration are mixed at best. Euroscepticism is in record heights, and despite all efforts, many citizens of the EU do not feel that their voice does count. What is the social democratic vision of the future EU, and how is it different from projections of other political movements?