Conference organised by the Committee of Regions

One year after the proclamation of the European Pillar of Social Rights, a key question remains: how to deliver on the promises made by Heads of State and Government at the Gothenburg Social Summit in November 2017? During an inter-institutional conference organised by the European Committee of the Regions (CoR) on Monday, representatives of regions and cities stressed to the EU’s Commissioner Marianne Thyssen that the EU’s cohesion policy must continue to support the implementation of the European Pillar of Social Rights with the active involvement of local and regional authorities.

Click here to watch the full video of conference 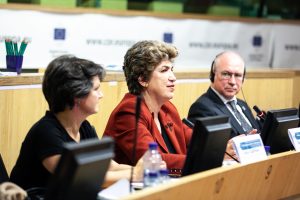 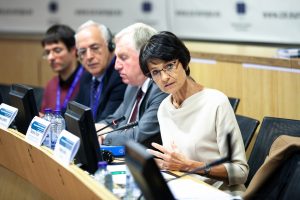 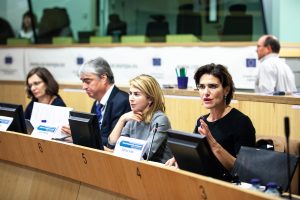 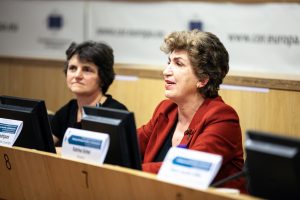 Karl-Heinz Lambertz, President of the European Committee of the Regions, said: “The EU must always strive to empower its citizens by creating decent jobs and protecting health, ensuring no one is left behind. The European Pillar of Social Rights placed social protection and inclusion back at the heart of the EU’s agenda but delivering it needs shared commitment across all levels of government. Now, more than ever, we need an ambitious EU budget with a strong cohesion policy after 2020. Regions and cities are ready to renew Europe but cutting or centralising EU funds – especially the European Social Fund – will hold back our ambition.”

Marianne Thyssen, European Commissioner for Employment, Social Affairs, Skills and Labour Mobility, said: “Our politics may be local, but the challenges we face are European or even global. The Committee of the Regions squares this circle: you help us think continental, but act local. The European Pillar of Social Rights does the same. It tackles continental challenges through action that is not just European, but also national, regional and local.”

As the CoR considers that social rights should be on par with economic rights, it has called to introduce a chapter of social progress to the EU Treaties and to put in place binding social targets for the Member States. It also believes that the scoreboard that supports the European Pillar of Social Rights should include territorial data to address regional disparities. Regions and cities are also calling for a wide mobilisation for skills and education to boost investment in human capital and to improve the match between skills and labour market needs.

José Ignacio Ceniceros (ES/EPP), Chair of the CoR’s Commission for Social Policy, Education, Employment, Research and Culture (SEDEC) and President of the Government of La Rioja, stated: “Social and economic disparities between and within European regions are the cause of dire demographic changes, brain drain, immigration and populism. With appropriate funding and strong political will, the Social Pillar can become a weapon against inequality and seclusion and provide the less fortunate among us with the necessary training and skills to navigate in a competitive job market and become active and productive members of their communities.”

Heinz-Joachim Höfer (DE/PES), Mayor of Altenkirchen and CoR rapporteur on the European Pillar of Social Rights, said: “To make the principles of the Pillar a reality for all Europeans, we expect much more ambition and swift action from the European Commission. We are still waiting for a European strategy for affordable housing, a European anti-poverty plan to reduce the number of people at risk of poverty or social exclusion, and adequate measures to protect platform workers. It is even more worrying that the budget cuts foreseen for the 2021-2027 period, such as for the European Social Fund, will hinder the successful delivery of the Pillar particularly in laggard regions.”

European Parliament rapporteur Maria João Rodrigues (PT/S&D) also stressed that “the next EU budget should deliver on the promises made in Gothenburg: to build a fairer Europe and strengthen the social dimension of the EU before the 2019 European elections. Local and regional authorities should be properly involved in the preparation and implementation of the next budget programmes. Their specific knowledge of regional and local needs makes them special partners for an efficient implementation of the Social Pillar.”

The Austrian Presidency of the Council of the EU was represented by First Advisor Andrä Ruppechter, who highlighted that pushing towards economic and social convergence can make European economy more stable and productive.

Luca Jahier, President of the European Economic and Social Committee (EESC), concluded: “The EESC and the CoR must join forces if we want this Pillar to deliver for the wellbeing of all citizens. We are both best placed to assess implementation from a territorial and civil society perspective. The urgency is upon us to tackle divisive inequality and bring about the change citizens are craving for.” 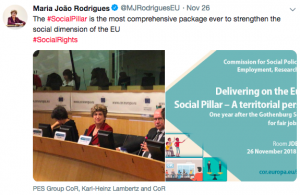 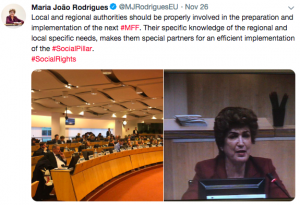 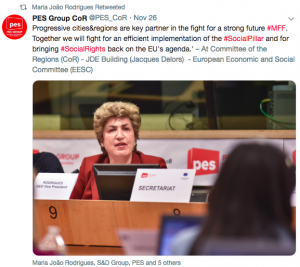 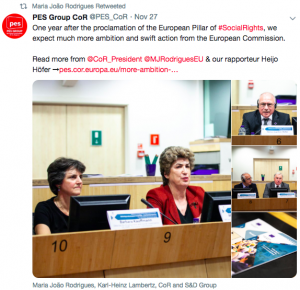